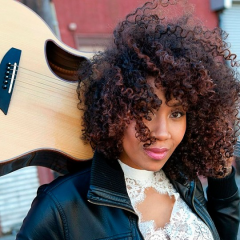 Rissi Palmer's gift lies in reaching across boundaries. She is at home in R&B but made her mark in country, bringing the entire spectrum of popular music to bear on music she calls “Southern Soul.” She was offered her first publishing and label deals at 19, and in 2007 released the album Rissi Palmer, charting with the singles, “Country Girl,” “Hold On To Me,” and “No Air.” Her most recent release, Revival, has been critically hailed as her most personal and uplifting work yet.

Palmer has performed at The White House, Lincoln Center, and the Grand Ole Opry, has appeared on Oprah & Friends, CNN, the CBS Early Show, and the Tavis Smiley Show. She has shared stages with Taylor Swift, The Eagles, Chris Young, and Charley Crockett, and she has been featured in Rolling Stone, The Wall Street Journal, People, Parade, Ebony, Newsweek, and The Huffington Post.